Sorry if things are going wrong!

Every release fixes many bugs, works in more scenarios, and provides clearer logs for troubleshooting.

Try to install the latest major-version release or even a pre-release snapshot before you try anything else!

Your editor should make clangd’s stderr log available (see installation for how). These describe the messages exchanged between the editor and clangd, and what clangd was thinking.

Even if you don’t understand the contents, it’s tremendously useful to include this when filing a bug. If you add --log=verbose to the clangd arguments, this will include more detail (e.g. the full content of LSP messages).

If your code builds OK but clangd shows lots of error diagnostics, it probably can’t parse your code very well. Other features will work poorly too: 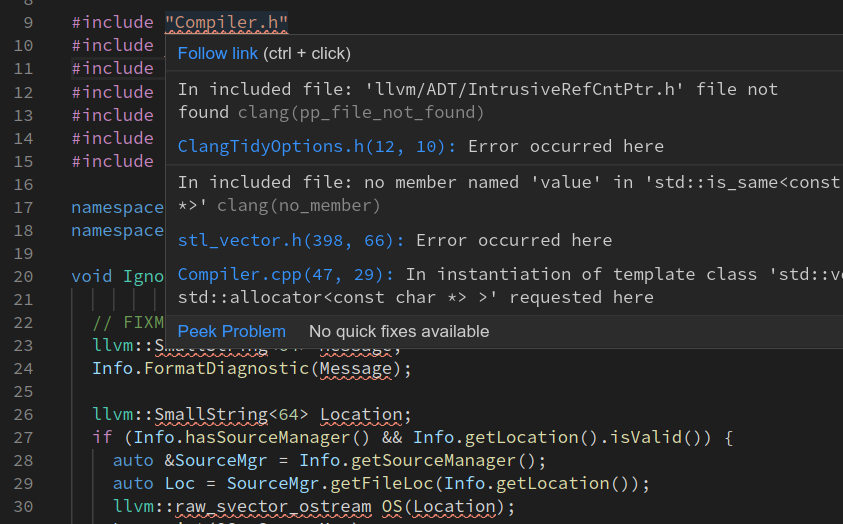 Can’t find includes within your project

This usually means that we don’t have a compile command for this file. compile_commands.json should exist in some parent directory and should have a valid command. If this file has changed, you’ll need to restart clangd to see the changes.

The logs can tell you whether compile_commands.json was found and what compile command was ultimately used.

First, you’ll need the standard library (and any other libraries you depend on) installed on your system! Even if you don’t actually build on this machine, clangd needs to parse the headers.

If you’re using an unusual compiler (e.g. a cross-compiler for a different platform) you may want to pass --query-driver=/path/to/mygcc to allow clangd to extract the include paths from it directly.

These headers are formally part of the standard library, but so closely coupled to the parser that they are installed with clangd.

They must be found in ../lib/clang/<version>/include. If you’ve built clangd from source or installed it from a package, these should be in the right place. If you’ve moved the binary around, move it back!

If clangd is exiting unexpectedly, this is probably a crashing bug in clangd. Understanding it better will help you work around it, and if you can file an informative bug report we’ll try to fix it for the next release.

The most helpful crash reports have a log including a (symbolic) stack trace, some idea of what the trigger is, and fairly compact example code that exhibits the problem.

If clangd crashes when you go to a particular definition, or hover on a particular name, then the bug is probably in the code handling that request. You can sometimes just avoid doing this!

If you can, try to work out the simplest program that will still exhibit the crash. This is a much more useful/fixable bug report.

Crashes when opening a file

If clangd triggers as soon as you open a particular file, it’s likely a crash when parsing or indexing that file (or an included header). Again it’s very useful to know what’s in the file and minimize it as far as possible (especially include).

A crash goes that goes away when disabling clang-tidy (--clang-tidy=0) is likely specific to a particular check and pattern of code.

Note that a background-indexing crash can appear to trigger on file open.

Unfortunately a crash while background-indexing any file can take down the whole clangd process. When you start clangd again, it will pick up where it left off, and crash again. You can tell that this is happening if adding the clangd flag --background-index=0 avoids the crash.

Typically many files are indexed at once and it can be hard to tell which is crashing. Pass -j=1 --log=verbose to clangd to only index one file at a time and log its name. Once the file is identified, it can also be reduced to a simpler crashing example.

Getting stacktraces from crashes

clangd is likely writing a “stack trace” to the logs which helps explain why it crashed. It may look unhelpful, like this:

It will be more useful if you have llvm-symbolizer on your PATH.

This is typically part of the llvm package. It may be installed as e.g. llvm-symbolizer-10, and you need to add a symlink.